On our third day in Yellowstone, we did a longer trip around the park. We started by visiting Gibbon Falls, which is fairly close to the park entrance.

After Gibbon Falls, we drove on in the direction of the Artist Paint Pots, famed for their bright colours and boiling mud. On the way to the paint pots, we noticed a group of bison, not far from the road in one of the meadows. We pulled over and got out to take photos, taking care to keep our distance. It was a herd of maybe ten to twelve adults and two, very cute, ginger babies.

After a suitable amount of photos were taken, we carried on to the artist paint pots where we saw some very cool boiling mud. This is one of my favourite geothermal features, because it is just so satisfying to watch.

Our next stop was the spectacular Grand Canyon of Yellowstone. This is the place where Yellowstone gets its name. The canyon is an incredible place to visit, with several viewpoints along it, including one at the top of the magnificent lower falls.

We viewed the falls and then drove further along the road to get the the viewpoint above the falls. You can see right down as they cascade over the edge, tonnes and tonnes of water crashing down every day. The power of nature never fails to impress and delight me.

We eventually left Yellowstone Canyon to drive through the Hayden Valley, which is where many of Yellowstone’s herd animals hang out. If you want to see bison, this is the place. We drove through the vast meadows, counting bison. We saw one crossing the road at one point. They are such incredible animals, and it was a privilege to see so many.

Eventually we came to an area called mud volcano, which has even more boiling mud than the paint pots!

This wasn’t the highlight of our visit to mud volcano, however. The main event was the very close bison that was chilling out near the walkway. The bison that then decided to have a bit of a roll.

It was so playful and a really cool thing to watch and be so especially close to. Who knew such a big hunk of beef could be so cute?

We drove on, round the road that led us back to the main geyser basin. We saw the absolutely gigantic Lake Yellowstone, which was ringed by lovely mountains.

After more driving, mainly through trees, we reached the main geyser basin again in just the perfect time to see Old Faithful go off again – it doesn’t get old!

We had dinner in a strange canteen next to Old Faithful – it wasn’t the best food.

On the way back, even though the light was dwindling, we decided to pull over at Grand Prismatic Spring to see what we could see. The sun was setting, so it was very atmospheric, but you couldn’t really see the famously stunning bright colours of the spring – we would have to return on the following day.

We drove back towards the motel, the sky gradually darkening, the odd deer or elk seen through the trees or across a river.

Suddenly, we hit a small line of traffic, so we slowed, wondering what we would see. Small traffic jams in a place like this usually meant bears or some other kind of exciting wildlife. This was not an exception.

As the car in front of us pulled around, it revealed the herd of bison from earlier walking in the middle of the road.

We sat still and quiet as they slowly and gently ambled past the car in pretty-much single file. A big adult at each end of the line and the beautiful ginger babies in the middle. We were in the car, but they were all going past less than 1m from us, calming walking to wherever it was they were going.

I was too in awe to take any photos, which is a shame, but the experience will stay with me for the rest of my life, especially the way the lead male gazed steadily at us as he made his way past.

Our final full day in Yellowstone began as they all did, in Greens and Grounds having breakfast. We had quite a few places we wanted to get to, starting with fountain paint pots.

They were similar to artist paint pots and the mud volcano, with more boiling mud and lots of sulphur smells.

After the paint pots, we went back to Grand Prismatic to see it in full light. The colours were spectacular in the light!

We went back to the main basin to grab some lunch at the geyser grill – it was the same food as in the cafeteria in Mammoth.

We basically ran from there to Daisy Geyser to see it go off – it goes at an angle, it’s pretty cool.

We started to walk back the long way, to see some of the other geysers one more time. Grotto Geyser was bubbling up a bit, but Eva and I walked on, unconvinced anything else would happen. After no more than a minute, Dad shouted us to come back because it was erupting. Mum said she had wanted it to and then it did.

We went round geyser hill again and back to view Old Faithful one last time before we left.

After a quick visit to the gift shop, we went to Black Sand Basin which had a cool, constantly bubbling geyser called Cliff Geyser.

Our last stop in Yellowstone was Firehole Lake Drive, where we saw a pretty spring, some lovely lakes, by which was a random pelvis of an unknown animal and also a final geyser.

This geyser was called White Dome Geyser. We took some pictures and then, as Dad, Eva and I walked away, it erupted. We concluded that Mum must have some sort of geyser-whisperer powers and can set off geysers at will.

Back in West Yellowstone, we finally made a visit to the Wolf and Grizzly Centre, just down the road from our motel.

The bears come out on a rota, either alone or in groups of up to five. We saw two bears called Spirit and 101 at first, then they returned to their enclosures and a bear called Nakina came out. The bears are all rescued – they became a problem in the wild by being habituated and so were brought to the centre to avoid being destroyed. Now they help educate people about bears and hopefully stop more bears becoming habituated.

The wolves were very cool too. They have three pairs: McKinley and Leopold, Kootenai and Akela and Adara and Summit. They are all spare puppies in litters of movie wolves, so were not born in the wild. They too help educate people.

The centre also has an area for ground squirrels, who likely enjoy being in a safe enclosure.

Finally, the centre has an area dedicated to rescued birds of prey who can’t be released back into the wild for one reason or another.

After spending some time at the centre, we went back to Bullwinkles for dinner where we had some tasty cocktails and I had a lovely taco bowl. We decided to have some cheesecake for afters too! 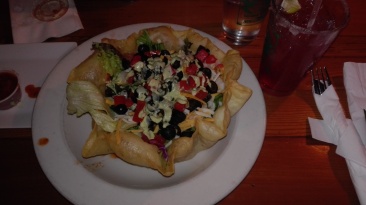 We stopped at a little souvenir shop on the way back to the motel and then headed back to pack up.

The next morning, we returned to the bears and wolves for one last look – we saw Sam and then Roosevelt, Grant and Coram the bears. It was especially cool to see the three bears together as they started swimming in their pool and play fighting with each other. The bears aren’t really far away either, so it’s very cool to be so close.

The wolves were mainly dozing, but we still watched them for a while. Dad headed out to get some food for our journey, while Mum, Eva and I kept watching the mesmerising creatures.

Eva and I found a section with all sorts of bins and boxes that the bears had “tested” to show which things are bear-proof and which things aren’t. There were also bear traps you could go into.

Inside, there was a big exhibition on bears, which included a big stuffed polar bear. This made us think of our big white car, which we had named Iorek, after the polar bear in Northern Lights.

We went back to the motel, packed the car and drove away from Yellowstone, sad to leave, but happy to have experienced such a special place.

Our stop for the night was Boise, in Idaho. The drive went smoothly until we stopped for lunch and petrol. For some reason we couldn’t get the petrol pump to work and ended up having to get a man to help us. There wasn’t really anywhere to sit at the rest area we were at, so we had to sit in the hot car to eat.

We drove on and eventually stopped again to go into subway to get ice-cream as it was really really hot. I had a lovely ice-cream milkshake.

While we were there, I used the toilet, which happened to have a urinal in the same little room. Because I am a feminist icon, I used it!

It didn’t seem like long before we got to our Best Western in Boise and checked in. We had to drive out to a place called Meridian, just up the highway from our motel to get dinner at a place called Blaze pizza, which does proper vegan pizza and cooks the customised pizzas really really quickly. SO tasty!

We had a bit of hoo-ha trying to get back to the highway because of annoying one way systems, thank God for my map app, but made it back to the motel in time for a good night’s sleep.

The next day we drove to Yakima, back in Washington. The drive was nice, through lots of yellowy hills.

We stopped for lunch at a supermarket, where we struggled to find food for me and Eva – seriously, the take-home message is not to be a vegan or vegetarian outside of the cities in the US. And even then in probably depends on the city.

Yakima is a big hops growing area, so as we drew near to our destination, fields of hops began becoming more and more frequent.

In Yakima, we found our motel and were surprised to find that one of our rooms was ready and the other was still having its carpet fitted.

Turns out they were gradually refitting the carpets in this seedy motel and they hadn’t finished in time for check-in. Two hill-billy looking men were working on the room, the furniture just hanging round outside.

We went out for dinner at a nice Indian place and by the time we came back, the carpet was in and we could go to bed.

The next morning, we had a stereotypical American breakfast in a diner down the road from the motel, called Mel’s Diner. We managed to order something we all could eat, but there was so much food we couldn’t eat it all! The pancake stack that came with the breakfasts was FOUR large, thick pancakes. They were very tasty, but you’d need a big big appetite to finish them.

The drive from there to Sea-Tac airport was easy. It was finally time to board the plane that would take us back to England.

Both Eva and I had been out of the country for over six months and it was an odd feeling to be returning home, but more on this in my next post about returning to my UK life. I hope you have enjoyed reading about my adventures on my world tour, it was an excellent time that I will never forget!