I arrived in Melbourne quite late, after a very nice flight with food and inflight entertainment despite only being four hours long. I was very tired, because I had flown from Samoa to Auckland, then spent the night at Auckland airport before catching my flight to Wellington to connect with my flight to Melbourne. It was a horrible night, despite having Chris’ company, as I didn’t sleep at all.

When I arrived in Melbourne, I got the bus to my hostel – they have a service that takes you from the main city bus terminal to your hostel for free. I checked in and slept!

The next day, I woke up and could properly get to know my surroundings. The room was lovely and clean – only two sets of bunk beds, with only three occupied, including mine. I went out to buy food for the week – it was pretty damn cold after being in hot hot Samoa for two weeks!

Food is cheaper in Australia than in New Zealand, so I could easily stay in budget. Back at the hostel, I had breakfast and sorted my things out, before heading into town just after lunch.

I decided to do a free walking tour – these are a great way to orientate yourself to a new place and they cost as much as you want them too (they are free, but usually you tip). The first one I did was in Rome three years ago, and now they’re a go to when exploring somewhere new.

This tour was really good, especially as our guide, Laura, was so enthusiastic. We saw the State Library, the Old Gaol, the Exhibition Building, two pretty parks, parliament and China Town, as well as some of the cool laneways that they have here.

The State Library is pretty cool, inside is the armour worn by the infamous gang leader, Ned Kelly. The Old Gaol (pictured below) was his last residence before he was hanged on 11th November 1880.

The Royal Exhibition Building is the first world heritage site-listed building in Australia. It was built for the Melbourne International Exhibition in 1880 and is still used as an exhibition venue as well as an exam hall.

The parliament gardens is one of the parks we saw – some of the trees have special bands to stop possums climbing them. These don’t work – we even saw a possum in one of the banded trees.

Melbourne’s laneways are very famous. They are basically alleyways, that have been transformed either by street art, or tiny cafes and shops, or both. The street art scene is phenomenal with some laneways being completely repainted every week.

There are also some cool arcades – fancier, covered alleyways. The block arcade, whose floor is shown below, houses an incredibly popular tea room called Hopetoun Tea Rooms – right now their next available reservation for high tea is in ten weeks!

After the tour, it was getting dark, so I headed back to the hostel. I had been invited out to meet James and Gary, my Mum’s cousin and his partner at their flat. The original plan for my time in Melbourne was to stay with them, but they had just moved all their stuff in a few days before I arrived and their flat was literally STUFFED with boxes! No room for me this time.

We went out for a lovely dinner at a Greek restaurant called Hellenic Republic, where the food was very tasty. After a few hours of enjoying the food and catching up, they put me back on the tram to my hostel, where I headed to bed.

The next day, my first stop was the NGV (the National Gallery of Victoria), which has a gorgeous water window in its entrance. There was a lovely photography exhibition on, as well as one about chairs.

Being a designer is 99% about chairs, so I went.

These chairs were particularly arty explorations of the concept, but some of them were pretty cool – like the one in the shape of a fierce orca. For some reason, chairs are something that people love to design, maybe because we spend some much of our time in them? I suppose someone has written and article about this phenomenon somewhere.

After the gallery, I headed over to the State Library, mainly to see Ned Kelly’s armour. I have always been fascinated with crime stories, as my TV history would tell you, so gang leader armour is the kind of  thing I like to see.

The library itself is very grand, and was full of revising students.

Ned Kelly, for those who don’t know, was an Australian bushranger in the late 1800s. Bushrangers were the Australian equivalent of highwaymen, but Kelly also committed other thefts as well as assaults and murders. His life of crime came to a head when he and his gang took over a town called Glenrowan, keeping 62 hostages in a hotel there. There was a shootout with the police, during which Kelly wore some armour that he made to prevent him from being shot. However, the armour didn’t cover his legs, which allowed the police to shoot him and capture him.

The views were great though, so I stayed for a long time, just enjoying the view. I watched the sun go down and the lights come on.

All I managed to do on day three was see the Shrine of Remembrance. The shrine was originally built to commemorate those who served in WW1, but is now a shrine for all Australians who served in war.

I arrived in time for the flags to be taken down for the day, to a bugle call.

I sat there for a while as it got dark and watched the flame they have there.

The next day, I went to see St Kilda. This is an area of Melbourne by the seaside. Even though it was pretty cold, I always enjoy walking by the sea. St Kilda was easy to get to by a tram.

I walked along the high street and had a peak in all the cute little shops, before heading towards the sea. On the way I passed Luna Park, an old theme park with a very brightly coloured and mildly terrifying aesthetic.

The beach was beautiful and the weather was good, so I could explore without getting wet and (too) cold! By the beach is a long pier, with a cute little pavilion building on it, which doubles as a cafe – I got coffee there. Apparently it burned down in 2003, but was rebuilt using the original 1903 plans. 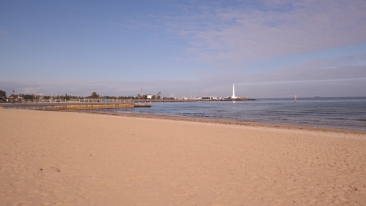 I love the seaside – especially the dogs running along excitedly. There was one dog that wouldn’t stop barking at the birds as he tried to catch them – so cute!

The other side of the high street from the seaside is the St Kilda botanical gardens, which I decided to go and see. On my way there, I enjoyed the crunchy leaves that lined the pavement (crunchy leaves are the best – I even have an instagram video from last year when I went to Kew Gardens of me jumping in the leaves)! They have more autumn leaves in Melbourne than they did in Levin – I suppose that they have different kinds of trees in New Zealand, maybe more native ones than ‘English’ imports.

The gardens were nice, but not at their best as it was autumn. They had a beautiful gate though, decorated with stunning details in the ironwork.

After a brief time in the gardens, I headed back to the pier to look for penguins!

Behind the pier is an area of rocks that houses a penguin colony. They are called Little Penguins, sometimes called Fairy Penguins, due to their small size – they are only 33cms high!

They come out more often at dusk, so I headed down for sunset. There were lots of other people there too and we were lucky to see one standing between the rocks, looking out at us and being thoroughly photographed.

After my penguin encounter, I went to get fish and chips, before returning to my hostel.

The next day I met James and Gary again and they took me to the Heide Museum of Modern Art. We had brunch, then a look around. The Heide site is made up of several buildings. The first is an old farm house, Heide I, which John and Sunday Reed moved into in 1934. The couple opened their home to like-minded artists. In 1964, they commissioned a new home to be built on the site in the modernist style. This is Heide II.

The site also includes Heide III and the Sidney Myer Education Centre. The spaces are all art galleries. There were some very interesting paintings, but my favourite part of the site was certainly Heide II. The design of the space was beautiful as both a living space and a place to display art – truly stunning.

After our visit to Heide, James and Gary dropped me on Brunswick Street and also recommended I see Smith Street. I wandered up and down the two, going into the most interesting looking shops. They had some really cool places: arty cafes, second hand furniture shops and a very pretty tea shop.

I had a snack on a bench outside the Catholic cathedral. I wanted to go in, but even though it said there wasn’t a mass on, there was. It was still lovely from the outside.

On the Monday morning, I met Gary to talk about design (I want to be an interior designer, and he is one). He showed me some fabric houses and we discussed his work and costings and other aspects of the job. It was so helpful to have that meeting and great to have a conversation about design with someone who really knows their stuff!

After our meeting, I headed back to the hostel, then briefly out to the botanical gardens before the sun went down. It was gloomy and drizzly, but I could still appreciate the beauty of the place – I especially liked ‘Guilfoyle’s Volcano’, a water storage solution installed in the gardens in 1876, which has gorgeous plants coating the sides. 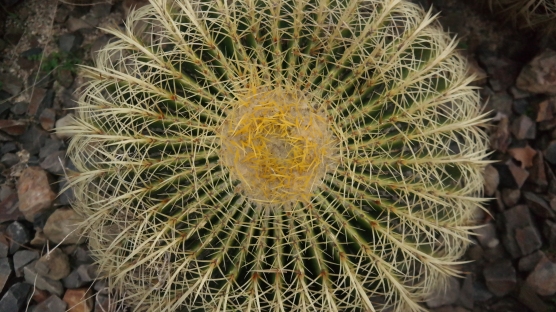 A barrel cactus on Guilfolye’s Volcano

House by the pond

On my final day in Melbourne, I mainly packed and did some more planning for my trip to Canada. In the evening, I met up with James one last time for dinner.

We went to a very cool, speak-easy type of bar in an odd backstreet, called Bar Americano. It certainly had the prohibition vibe and you weren’t allowed to take photos. We had some very tasty cocktails, made from things I hadn’t heard of.

We then headed to Chin Chin, a highly recommended Asian fusion place for dinner. We had a very tasty goat curry and a fiery papaya salad – the food was excellent. Afterwards we had some Vietnamese iced tea, which was red tea and ice and condensed coconut milk – this was amazing.

Melbourne was a marvelous place to visit, with its arty, hipster vibes and I’m sure I will return one day – I am intrigued to see some more of Australia after listening to people on the farm rave about it!