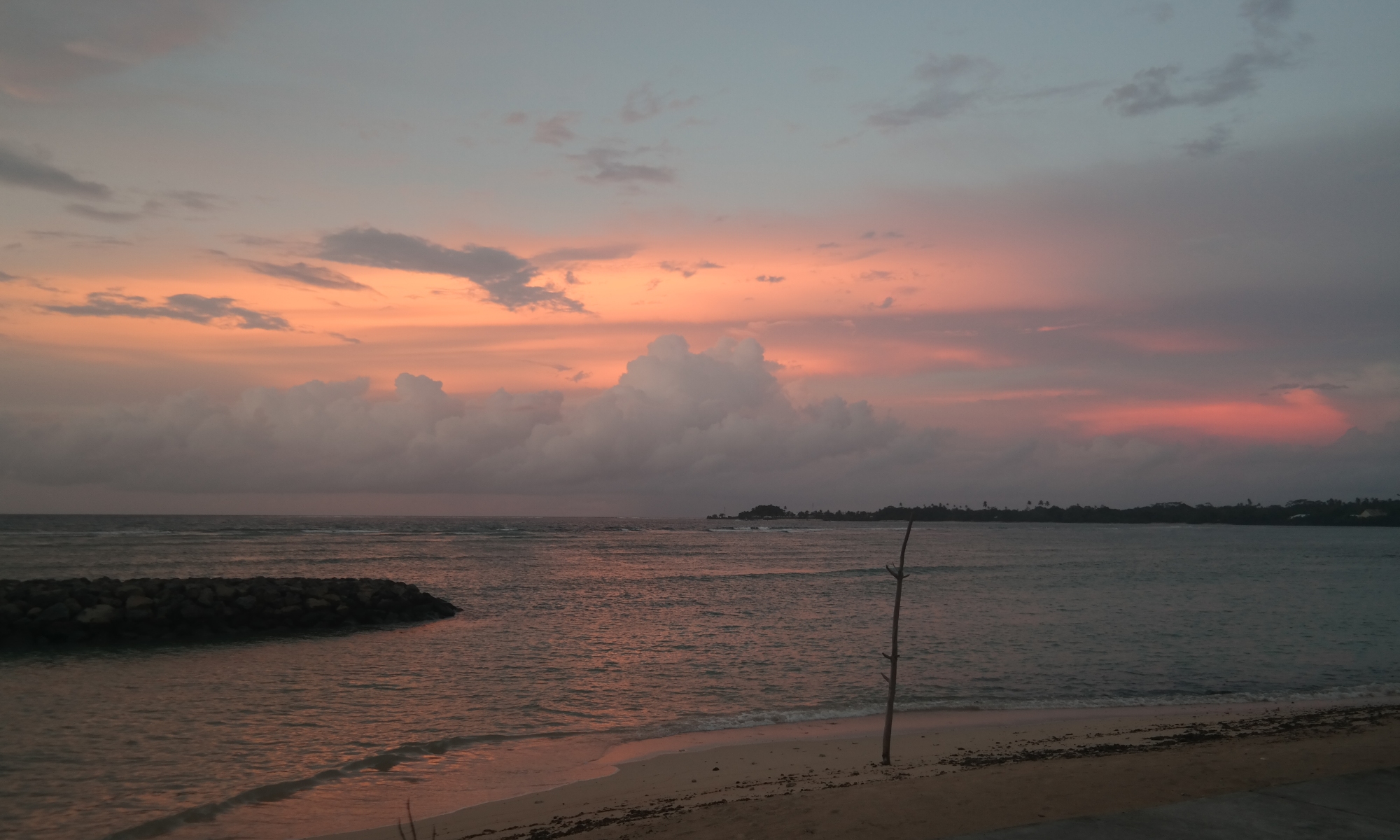 We left our accommodation in Apia, still feeling less than 100%. It was Sunday, which meant the streets were quiet as everyone was in Church.

We walked through town to the bus station and as we did so, we heard some beautiful singing coming from a meeting house near the harbour. A church meeting.

We turned the corner to there bus station and saw a sight that highlights the difference between Sundays and the rest of the week in Samoa.

The chaos of the myriad of buses, people running to and fro, selling things, piling in and out of cars or taxis – it was all gone. There was one single bus standing at the far end of the large, empty car park.

So no prizes for guessing which bus was ours then.

This bus was also dressed in it’s Sunday best – it was white, but still pimped out to an extent. We waited for a while, then the bus pulled away, carrying us towards the harbour.

We arrived at the harbour in time to see the ferry arriving. This ferry would take us to Savai’i, the other main island of Samoa and also the biggest. It was quite a small ferry, holding a few cars – maybe thirty – and several hundred passengers.

We boarded from the big red terminal building and found a lovely air conditioned room filled with coloured plastic seats. I enjoyed the crossing and wandered outside to take photos every now and then. The sea was so beautiful, so blue and the islands stood out against the sky, Savai’i rising from the haze and Upolu disappearing back into it.

The crossing took around an hour and a half and cost 12 tala (maybe £4). We arrived at the equally red ferry terminal and began the hot walk to our accommodation at a place called Lusia’s Lagoon. 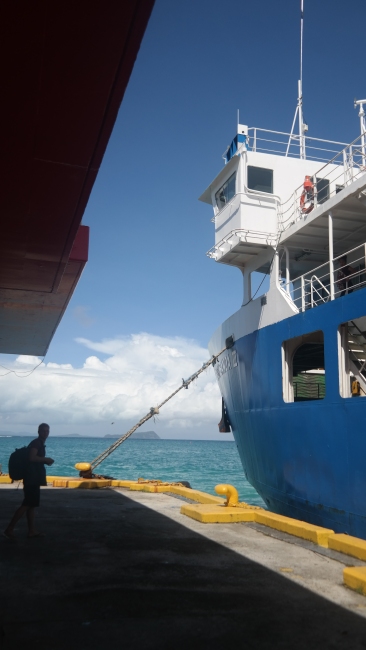 This accommodation was 60 tala per night (maybe £20) including breakfast, but not dinner. It looked amazing on the website. In reality, it was nice, but a little run down. The lagoon was still stunning, shining beautifully turquoise in the afternoon sun.

We went for a walk out in the town, which was very small and occupied, it seemed, mainly by pigs and dogs wandering the streets. We visited the Jet Over hotel, where we spoke to a nice lady about car rental. We also spoke to another nice lady at the visitor centre, who told us there wasn’t much to do on Savai’i!

We walked home via the supermarket to get water and then I went for a swim in the lagoon. Unlike the beaches that we visited on Upolu, the water was deep. It meant it was a bit cooler, but really nice to swim in. The only problem was that I kept getting attacked by seaweed!

As the fales didn’t serve dinner as part of the deal (and their dinner options were too expensive for our travellers’ budget), we walked along the road back to the wharf, where there was a takeaway burger shop. We had had chips and a chicken burger between us for lunch earlier that day and for dinner we indulged in more of the same.

The walk back was scary. It had got dark while we were eating and the road had basically no lighting. We had to use a phone torch to guide us, while we saw storm clouds gathering ahead of us, bursting with lightning every few minutes. The scariest thing were the loose dogs. By day, when they bark at you, you can see them and get a sense of their intentions. By night, it isn’t so easy to tell. We survived the walk unscathed, despite thinking we would be attacked at one point.

Back in the fale (this wasn’t a proper fale, more like a basic wooden hut on a platform over the lagoon), we settled in for the night.

I went out to shower. These were pretty terrible showers. The main problem was the complete lack of lighting. I managed to angle my phone from the pocket of my hung up trousers in order to see what I was doing. Usually I wouldn’t bother, but I was sharing the shower with several cockroaches and I wanted to see where they were, so I didn’t accidentally step on one. After an awkward shower, I stepped out of the door to see a massive hermit crab. Like 8cms across! I tried to take a photo but it was difficult in the dark.

Sleeping in the fale was comfortable and not so hot, as it rained heavily for most of the night!

The next morning I didn’t feel well enough to eat breakfast, so I gave it a miss. We packed back up and went back to the wharf to catch a bus to Manase, in the north of the island. I spent most of the bus journey feeling tired and a bit nauseous.

We arrived at Regina’s fales and were greeted by a Samoan lady and an Australian guy who worked there. He kindly brought us some fruit and toast.

I went into the fale for a bit to unpack and lay down, only to accidentally fall asleep for the next hour! Chris woke me up and went to get instant noodles for us for lunch.

We then went out to see about a rental car from here, but I didn’t get too far before I felt tired again, so I returned to the fale to sleep again, emerging for dinner, which was more rice and taro, along with a tasty curry and the very traditional young taro leaves and coconut cream, which I didn’t like much, but Chris really enjoyed.

The next day I felt much better, so we decided to walk to the lava fields in the afternoon. The walk was about an hour each way and it was hot! We wandered through thee quiet villages, lined with skinny horses, dogs, pigs and many many chickens.

We walked past a place where you can swim with turtles, but the reviews suggest that it is not a great environment for them and they are very crowded there – not one for us. It rained at one point, but just perfectly in time for us to hide under a beautiful umbrella-shaped tree.

We stopped at Dive Savai’i’s shop on the way too, so I could enquire about a snorkeling tour. They were very helpful.

We eventually reached the lava fields and paid our 5 tala entry. The lava erupted from a volcano between 1905 and 1911, covering a massive area. The lava overcame a church, which largely remained standing, but is now being reclaimed by vegetation. 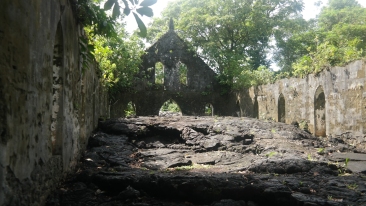 Me in the lava church

The lava fields themselves stretch out towards the sea, as soft black curves punctuated with green. The lava swirls were my favourite bit – as the lava cooled, it left these beautiful patterns in the surface!

At the lava field site, there is also a hole in the lava where some colourful plants have grown up. For some reason it is called the Virgin’s Grave.

We walked back from the lava fields in the heat and took even more photos.

I especially loved the “old seat nailed to a log” chair. After the hot walk we were glad to return, just in time for a swim before dinner!

The next day I woke up, really excited to see what under the sea looks like! I walked to the dive shop, which took around half an hour. I was greeted by a lady called Tina and given fippers and a snorkel mask. It was nice weather so I was optimistic about visibility.

We (three divers, four guides and I) waited for tide to come in a bit, then boarded the boat for our undersea adventure!

I was paired with one of Samoan guides for my snorkeling. At the first site, I was immersed into a whole new landscape – corals, both spiky and not so spiky surrounded me. It was mind blowing to be able to see everything – massive blue starfish, butterfly fish, little blue fish, big clams – and I was so happy!

The fish darted past. I struggled with my mask a bit – snorkeling is an odd sensation, but with the weirdness of breathing with your face in water to see everything!

After the first site, we moved to a second one. This was the best one. This site had a special kind of coral that is brown but turns white if you waft water at it quickly – it is called magic coral.

The guide also showed me some clown fish, who seemed curious about us and not really scared. They are so beautiful and orange!

After this we looked for turtles. The first one was big and clear and sculling majestically along just ahead of us! It quickly swam off when it noticed us.

On our way back to the boat, which felt like a long way, we saw the second turtle! I was repositioning my mask and the guide told me to look down and there it was! Directly below us, smaller than the first one, with a perfect pattern on its shell.

We also stopped at a small shipwreck, which the divers saw better than I did, but I did see some of the weird thin needle fish hovering uncertainty by the mooring line.

The sea is a strange new environment for me, but I love it. I can’t wait to snorkel again, or even dive!

I got a lift back to the fales in time for dinner which included some local parrot fish, which are weird because they have teeth.

The next day, we left Manase to got back to Salelologa, the wharf town. The bus journey was nice and I was able to see everything I missed on the journey up. We stopped outside the Jet Over Hotel and booked our car for the following day.

We checked back into Lusia’s Lagoon and then went out to exchange money and get some lunch. The centre of Salelologa is very small, with various shops and a covered market, which we also explored.

Like the market in Apia, it sold fruit, clothing, random household objects and beautifully carved wooden souvenirs, like turtles and ceremonial war axes.

We headed back to the fales and swam in the sea – I already miss this! I showered to avoid doing it in the dark and we ran to the takeaway and back. On our way back, it was still light, so we avoided scary night dogs, and we also saw some locals playing volleyball and a pig eating a coconut. As we got near, she defensively picked up her coconut and ran away with it!

That night, we relaxed on the terrace overlooking the sea, listening to the waves lapping below us. Chris showed me his travel “best of” album, which further cemented my desire to go to Asia.

We were very excited to finally tour the islands in the following days – more on this in chapter 3!