Since my amazing two months travelling around what I can now say is one of my favourite countries in the world, I returned to North Island (I miss South Island!) and began working on a farm.

The farm grows vegetables. It is called Woodhaven Gardens and it is in Levin, which is a small town north of Wellington. It has a population of about 20,600 and is actually the 22nd largest urban area in New Zealand. There are only 21 places that are bigger here.

Before I moved, I had a few more nights with the lovely Rhiannon and Wayne, who live in Paraparaumu (north of Wellington, south of Levin) and Jason and Kimmie, who have moved there for now as they are moving to the UK fairly soon.

I didn’t do too much, just organised my life, cried over my nearly empty bank account and took photos of their cat, Freddie.

Soon enough it was time to move to Levin. I took the bus up and found my new home – a holiday park, imaginatively named “Levin Holiday Park”. I met Repi, one of the owners and shortly after Debbie, his wife and co-owner, who showed me to my cabin. The cabin is a very small room with two bunk beds. I am sharing it with Lydia and Annie, two slightly crazy, but friendly English girls.

We have toilet and shower blocks, a laundry room and a kitchen (a small one is reserved for just the Woodhaven workers). There is also a TV room and a ping pong table!

There are 13 Woodhaven workers living here: Annie, Lydia and I, who all hang out with Chris, who is a sassy German guy who is, rather stereotypically, organised and sensible. Alex (a Polish guy) and Eric (an American) live with Chris. There is also Eva (a Czech girl who gives me lifts to work) who lives with a Spanish girl whose name I’m not quite certain of and a Japanese girl I have yet to speak to. There is also Atis, from Latvia, who arrived at the same time as me, who lives with a Japanese guy I haven’t spoken to yet. And finally, there is Craig and Amy, a British couple.

It’s nice to have colleagues living with me, as we can talk about work and we all have a similar schedule. I am enjoying getting to know them and going to parties with the other workers on Saturdays.

I am a planter at work. Planting teams seem to move around a lot and are small. There is a tractor driver and two or three planters. There might be more than one team per field.

The tractor has a forklift on the front to move plants from the van that brings them to the field and carry plants along a row so you have enough to get back. The planter unit is a special trailer with seats for the planters, planting machines, a shelf for plants and sometimes a water tank.

The planters throw appropriate plants from the trays into the cups of the planting machine, which then makes a hole and drops the plant into it. The speed varies, but you have to learn not to miss any cups as it is mostly quite fast. Appropriate plants are strong and have good roots.

The bit that plants

After planting, you have to go round and “patch”. Patching is basically checking the plants are correctly planted and correcting any mistakes. Plants must be fully in the ground, but not too far, they must have the right spacing and weak plants must be replaced. 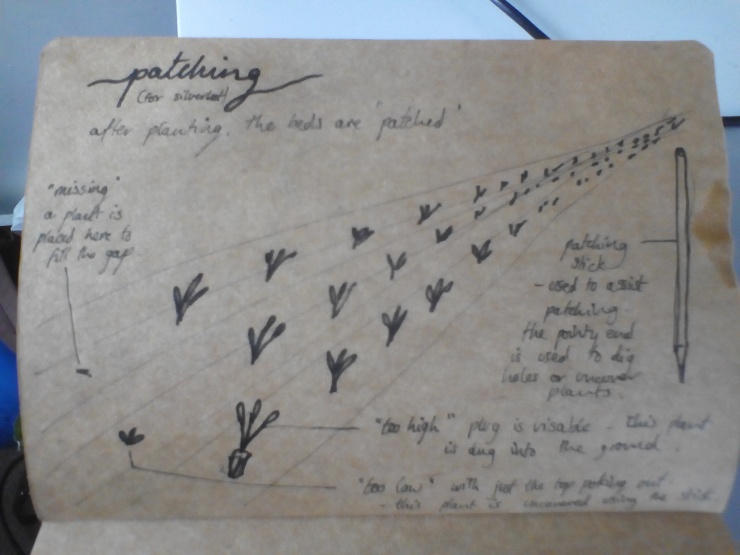 When I am not planting or patching (due to rain), I am in the packhouse. This is where the vegetables are packaged. In the packhouse I have out radishes in bags, put lettuces in bags, put silverbeet (like swiss chard) in bags, put spinach in bags, washed radish and peeled spring onions. I don’t really like the packhouse as it is boring, dark and wet. However, it is better than losing money by not working when it rains!

After working on the farm for two weeks, mainly planting (thankfully), I appreciate a bit more what goes into producing food. I am actually enjoying the hard work and the long hours mean I am being paid nearly $800 (£500) per week after tax!

My plan is to carry on working here for the next eight weeks, then have two final weeks in New Zealand before I head on the Melbourne and Vancouver!

One Reply to “Introduction to Farm Life”