I had a long bus journey from Napier to Paraparaumu (a suburb of Wellington where I was staying with family), but it all went smoothy. When I arrived the weather was nice, so after lunch my second cousin (Lana) took me to the beach and ice cream. It got windy very quickly, so we retreated back to the house.

I went out for a drink with my mum’s cousin and her husband (Rhiannon and Wayne), after which we picked up fish and chips for tea which we ate in front of a film.

The next morning, we got an early start and drove out to Martinborough to go to a big craft fayre which had loads of stalls. There was furniture and art and clothing and jewellery and food. It was massive. We wondered round for a couple of hours, enjoying the sun and laughing at the announcement that someone had misplaced their dog and it was at the information tent! 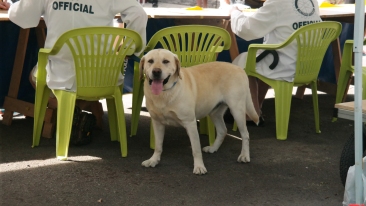 Someone lost their dog

After a couple of hours, we decided to head to a vineyard called Margrain and do a wine tasting. I have never done a wine tasting before, so was interested to note the contrast between the wines. Some wine was purchased, including a lovely Pinot Noir which we had later in the evening. We had lunch and stopped at a few places to pick up various food items: fruit, mushrooms and some lovely cheese. The cheese was from a herd of six cows. Each cheese was from a different cow.

The evening was spend eating tasty BBQ food and watching some classic Kiwi films: Footrot Flats (a farming based cartoon) and What We Do In The Shadows (a comedy “documentary” about some vampires living in Wellington).

The next day I took the train into Wellington and met Jason (Lana’s brother) and Kimmie. They showed me back to their apartment, then took me out to see some of the sights of Wellington. We had a lovely brunch, then walked around, with Jason and Kimmie pointing out interesting buildings, restaurants and cafes.

We headed back to the apartment and I picked up my camera. Then we went to the botanical gardens via the famous cable car (a funicular railway). There is a beautiful rose garden up there and great views of the city.

That evening, we went out again, picked up some fish and chips and headed for Mt Victoria. We climbed to the top (it is quite steep) and sat down to eat. The view is beautiful! It was quite hazy though, so it was hard to get a great photo.

After coming back and sitting down, Jason realised that we had discussed taking me to see the glowworms at night in the botanical gardens. We did want to keep sitting, but I also wanted to see them, so we went out again and climbed the hill as it was getting dark. We got to the banks where the worms lived just as they were coming out. The don’t photograph well, but are very beautiful.

As the next day was Waitangi day (the anniversary of the day the Treaty of Waitangi was signed and a day off), Antrim House was open. Antrim House is a heritage building which is the headquarters of the New Zealand national trust. I met mum’s other Wellington dwelling cousin, James and a friend of his and we took the tour round. It was interesting, although the building is full of modern office furniture. 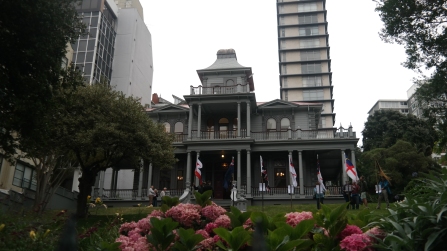 After this we got coffee and decided to reconvene in the evening to see a film called “Pork Pie” (another Kiwi film) at the Embassy Cinema.

When we met up, I discovered that you can take wine into the cinema here, which is magical. We got a bottle. The film was fun and showed off the great scenery of the south island – making me even more excited to go there! After the film we had dinner at a British style curry house, which was nice.

The next day was one I had to myself as all my lovely relatives were at work. I called Guy (my brother, who lives in Brazil), then headed out to the Te Papa museum. Jason and Kimmie had briefly showed it to me, so I was going back for a more detailed look around. I also bought some work clothes that day for an on boarding I had the next day.

Jason, Kimmie and I watched “Mirror Mirror”, a strange adaptation of White, in the evening. It was odd.

On the Wednesday, I had my on boarding, then walked over to Mt Victoria again to find a Lord of the Rings filming location. It was easy to find as the path is marked as “Hobbit’s Hideaway”. This road is the one where Frodo shouts “Get off the road!” as the other Hobbits collect mushrooms.

After some searching, scrambling over a fallen tree on a side “path” and a quick go on google, I found out that the tree they hid under isn’t actually there as it was a fake brought in for the filming.

I walked to the top of Mt Victoria again, to see a less hazy version of the view. While I was admiring said view, a butterfly (a yellow admiral) landed on my foot and sat there for a while – I made a friend!

The “Get off the road!” Road

A less hazy view of Wellington

I walked back down the hill towards the sea. On my way, there were a few more butterflies lounging on the path in the sun. They flew up into the bush when I came towards them, but they were still very photographable!

I walked down and along the seafront, admiring the views and the street art. My favourite is a piece with loads of sharks, protesting shark finning (boo, shark finning). 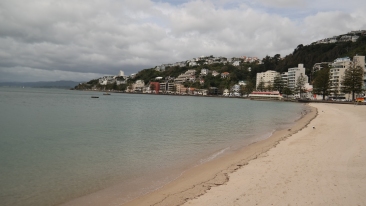 A beach near Wellington’s centre

A cool piece of street art

James had organised a fun evening for us at Zealandia, a massive nature reserve near the centre of Wellington used for conservation. We met and ate dinner at a nice little cafe, then took a taxi up to Zealandia.

We were booked onto a night tour which started in the light. To start with, we saw ducks, shags, pigeons, kaka and other day birds as we walked along by the lake (an old reservoir).

We also saw (and watched getting fed) the extremely rare Takahe, a type of grazing ground bird. There are only a few hundred left in all. Zealandia is a safe environment for native wildlife as there are no mammals inside. There is even a specially designed fence the whole way round to keep them out as mammals tend to eat the babies of, or attack, the native wildlife.

After we saw the Takahe, it began to get dark, so we walked on, trying to find kiwi. We found one, but mostly saw his back end as he wandered off. We also saw a tree weta (in a special weta hotel), a massive longfin eel (who came to see us and received some food), some tiny frogs, some Tuatara and heard many Morepork owls overhead.

Near the end of our tour we saw some white stick insects on a tree. We also saw three more kiwi! One was quite far away and stayed for ages. Another was close, but ran off pretty quickly and the third was very close and stayed for ages, rooting for insects to eat and generally ignoring us!

It was such an incredibly special evening, which I will remember forever!

Many thanks to my wonderful Wellington relatives for letting me invade their homes and for showing me round so well! Hopefully I will see you all again soon!