Arriving:
The train to Geneva from Rome was long. It left early, so I slept most of the way to Milan – I got very good at sleeping on trains! We changed at Milan and the next train to us to Geneva. The first train took 3hrs 20mins and the second took 3hrs 58mins.

To get to Annecy from Geneva was a train to Aix Les Bains then another to Annecy. This didn’t take very long – we had also been waiting for a double-decker train all InterRail and our last train as a group was finally a double-decker!

Staying:
In Geneva we stayed one night at the inventively named Geneva Hostel which cost £26.82 per person per night – Geneva is expensive! We were in a six bed female dorm. There was a bathroom along the corridor from the room and there was a lounge and breakfast facilities downstairs. We got a free travel card (not that useful for us) and free breakfast (much appreciated).

In Annecy we stayed in the lovely Annecy Hostel, which cost £20.27 per person per night for our own room with two single beds and one bunk bed. This hostel was small and alpine looking, but very lovely. The room was fresh and large, there was a bathroom next door to the room and a kitchen and lounge downstairs. In the garden was a large bar area with really cool seating.

Day 1:
When we arrived, we walked to our hostel and checked in. We settled in, then went out for a walk. After some bickering, we decided which direction to go in. We found the lake and saw the Jet d’Eau. We walked along a little, then went and found dinner at a burger place called Edward’s Sandwiches. You could design your own burgers! They were very tasty and reasonably priced for Geneva. We went back to the hostel for an early night, walking past all the stalls that were there for some kind of lake festival.

Day 2:
The next day, we got up early again and went for breakfast before walking to the bus stop. Turns out that the bus wasn’t running, so after maybe 30mins of waiting, we headed back to the hostel for Wi-Fi and advice. Apparently the best thing to do was to get a train from Geneva station to Aix Les Bains and change there for Annecy. We walked to the station and waited for the train – it was a short journey and soon we were changing onto our double-decker train!

We soon arrived in Annecy and walked through the picturesque French streets to the hostel which was quite simple to find, but it was hot again. After checking in, we headed out to find the beach, walking through the old town on the way. We saw two young ducks trying to swim against the river current – so cute! There’s town was exactly as I remembered from my last visit five years ago – so so beautiful! 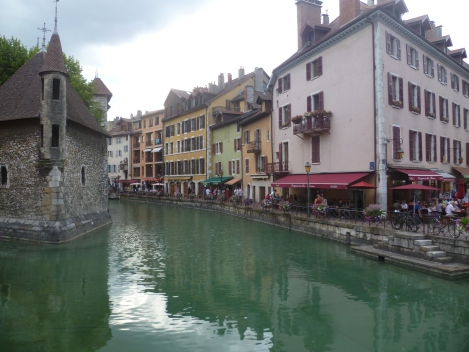 The ducklings trying to swim

Such a stunning place!

We got to the beach and Becky and I bought ice creams. I finally had a coconut and pineapple combo! We then went into the lake! It was a bit chilly, but lovely to swim in, with the gorgeous backdrop of mountains. You could see the paragliders whirling in the distance. After a while, we got out and sat down. I wrote my diary. I them jumped back into the lake for an obligatory selfie. 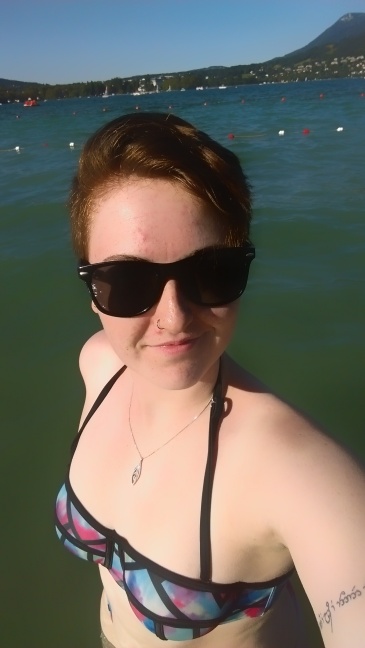 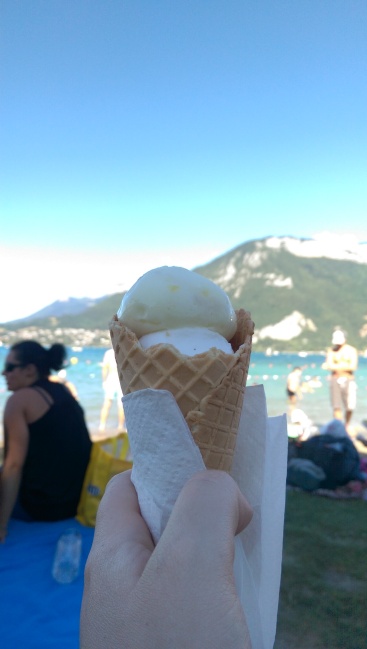 We walked home via the supermarket – Hayley and I were making chilli, Emily and Becky crepes. We got home and cooked, which took quite a while before retiring to our room to play “Game of life” before bed.

Day 3:
We got up reasonably late and headed out to visit the Gorge de Fier, which required us to take two buses and walk. The first bus (the 1) took us to Poisy, where we changed to a tiny minibus (the 12) to Loverchy. Loverchy is a tiny place high up on the hills. From there we walked down into the valley where the gorge lies. We stopped the way down to talk to some cows, some of which had bells! 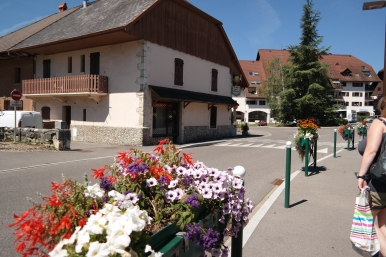 We arrived at the gorge and ate our picnic lunch, then we ventured in. The gorge was quite deep, with undulating sides. The path was actually a wooden walkway, supported from below by metal girders set into the walls of the gorge. The walkway sat about two thirds of the way up. The walk through was narrow and shady as the gorge is so slim that you can touch both sides of it in places. It is also breathtaking. We made our way along and found a sign which marked all the highest points that the water had reached. The highest was in 1960, at 22.7m. Under the sign was a small cave which we crawled into briefly. It didn’t go very far back.

View to above the gorge

The marker for flood waters

We walked along to the end of the gorge and then steps took us up and outside of it. We walked along above it. There were plaques explaining how you can see faces in the rock in places and a story about the gorge. Basically: girl married rich guy, rich guy turns out to be an alcoholic, she goes on walks with her bestie, her bestie falls in love with her, but she falls for handsome stranger, her bestie finds out and tells husband, husband tries to kill sexy stranger, he escapes but kills her bestie, girl locked in tower until she dies. Such a happy tale.

We walked back along the gorge, now taking in the faces in the rock. At the end, there was a room with footage and photos of the floods over the years. We left the gorge and began to walk back up the hill. We stopped at the a castle called Chateau de Montrottier on the way up, but it was too expensive to go in, so we just looked around. We climbed in the heat back to Loverchy. 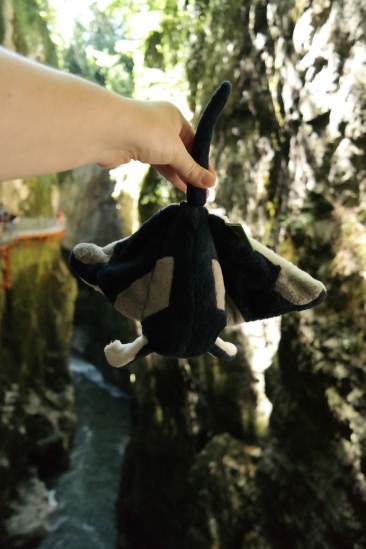 We then found it was an hour’s wait for the bus. We sat and read in the shade by the church next to the bus stop until the little minibus arrived. We arrived back in Poisy in time to catch the bus back to Annecy. We then went back to the hostel to get ready to go out to dinner. I also did some washing.

Not covering the corner I had eaten 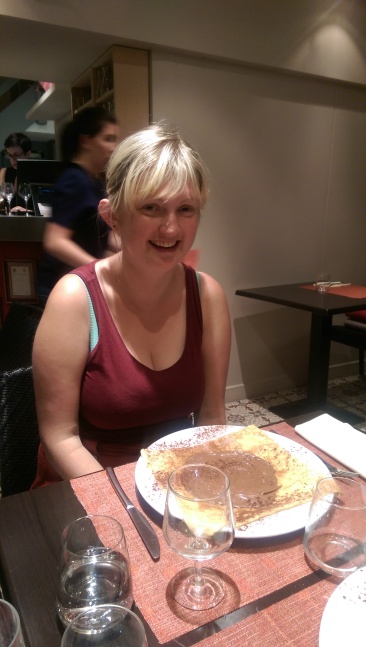 Emily and her crepe

We decided to go out as it was our last night and found dinner in a cute little creperie called Le Potron Minet in the old town. It was delicious. I had a cheese and potato crepe then a chocolate and cream one along with some cidre. We then walked home and packed ready for bed.

Thanks to Emily, Hayley and Becky for such an incredible holiday! Love you guys 🙂

Tips for Geneva and Annecy:
– Geneva is lovely, but expensive – recommended only to people with money!
– Annecy is a beautiful place, and not one most people would think of – go for at least 3 full days!
– Swim in the lake (probably only in the summer though) – it is lovely.
– Visit Gorges du Fier and Chateau de Montrottier if you have time – they are both brilliant!
– Spend some time wandering around the picturesque streets and have a leisurely French dinner somewhere – no better place!