Arriving:
We took a train from Munich to Nuremberg, then a bus to Prague from there. The bus was actually very nice and had wifi and a coffee machine on board.

Staying:
We stayed at Old Prague Hostel which was walking distance from most of the sights of Prague. It was £19.06 per person per night in a seven bed mixed dorm.

It was a large room with three sets of bunk beds and a single bed. There were massive lockers which had locks and their own keys. The toilets and showers were down the corridor. There was no air con, but large windows that could be opened. The view was just down onto the street, but below us was a very load bar where the Prague pub crawl began which kept us awake (especially Emily – I was okay because I had brought earplugs with me). There was also a lounge area and a small and ill-equipped kitchen (no oven and the hobs turned out not to work, so it was microwave and kettle!). The wifi here was terrible.

Day 1:
We arrived, paid and made dinner – cooking pasta in a microwave isn’t easy, but it is possible. We had also bought some ciders from the nearby shop – they were around £1 each! After the expense of Munich, Prague seemed incredibly cheap – we all overestimated how much money we would need. We went to bed quite early as we had gotten up early to catch our train.

Day 2:
The hostel provided breakfast “sandwiches” for free. They were terrible, basically all margarine, not recommended. We then headed out for another free walking tour (with Discover Prague) which met round the corner from our hostel by the Old Town Square. We were with Bianca, a very enthusiastic lady, who led us around the old town. We saw the astronomical clock, the buildings in the old town square – such as the Church of Our Lady before Tyn, the opera house, the Jewish quarter and some of the new town. The best thing about free walking tours is that you hear a lot of the stories behind the places you see, things you wouldn’t otherwise know. 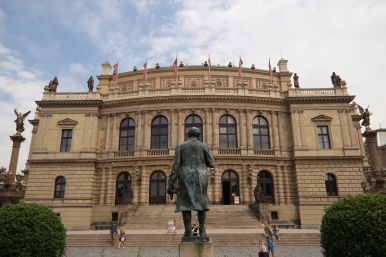 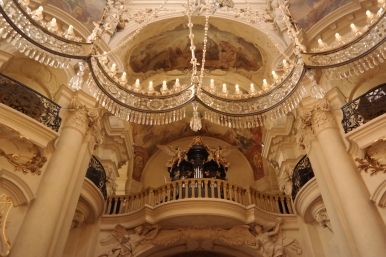 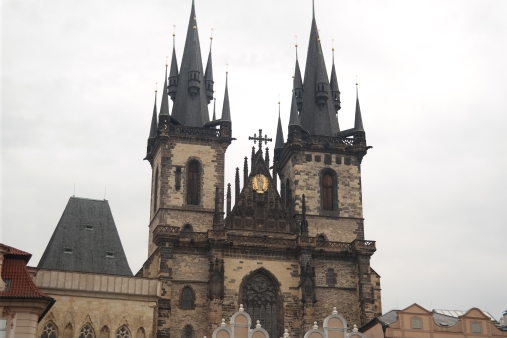 Church of Our Lady before Tyn

We then found lunch at a place called Bagueterie Boulevard, which consisted of some lovely iced tea, a baguette and some wedges with tartare sauce. We ate this is the old town square. Afterwards we had a look round some of the churches in the square, such as St Nicholas Church, before heading to the Jewish quarter to see the Spanish Synagogue which has a gorgeous interior.

The ceiling of the Spanish Synagogue

We then walked back to the Old Town Square to join the Prague Castle Tour. This was also with Discover Prague and our guide, Givi, was brilliant. He was knowledgeable and funny which made it a really worthwhile tour. The views from the castle district are also spectacular.The tour takes you through the castle district, you see Strahov monastery (which houses a massive library and was burnt down four times), the castle buildings which are all in different architectural styles, St Vitus Cathedral and a wonderful statue of a naked youth whose penis brings you luck if you touch it (isn’t that a good line)! 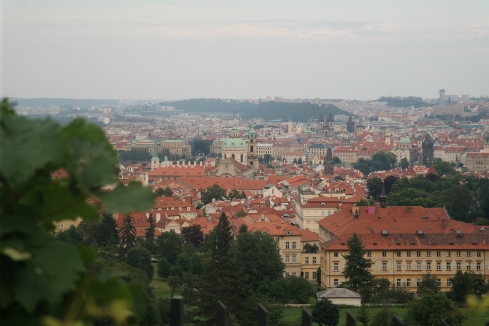 The view down to Prague 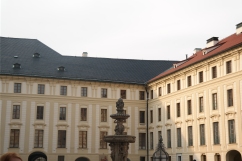 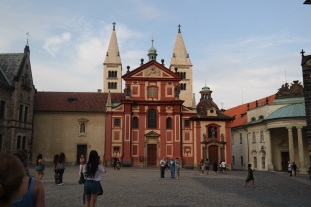 Hayley and the Youth

Our legs were tired at this point – perhaps two walking tours in one day is too much! We walked down the hill to find dinner and settled for a small pizza place called U Bodovce that also served traditional food. Becky and I shared a pork knuckle and a goulash – they were both very tasty. The same restaurant had a live jazz band playing. 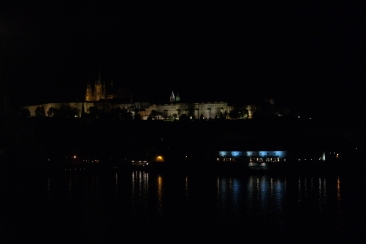 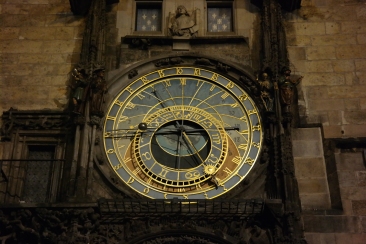 We then went home to change and go out to look at the Charles Bridge – it is very popular and busy in the day but quieter at night. Prague was stunning at night, especially the castle which is all lit up (thanks to the Rolling Stones who visited and were surprised the building was unlit so paid for the lighting).

Day 3:
We got up and headed to the station to take the train to Kutna Hora (about an hour’s journey) to see a church called the Sedlec Ossuary there which is decorated with the bones of 40,000 people. The train was old and the brakes squealed in the heat every time we slowed down or stopped. When we arrived, we walked through the dusty heat to the church. It was weird, but fascinating. There were piles of skulls in each corner of the quite small church, garlands of bones, a shield of bones and a giant goblet of bones. 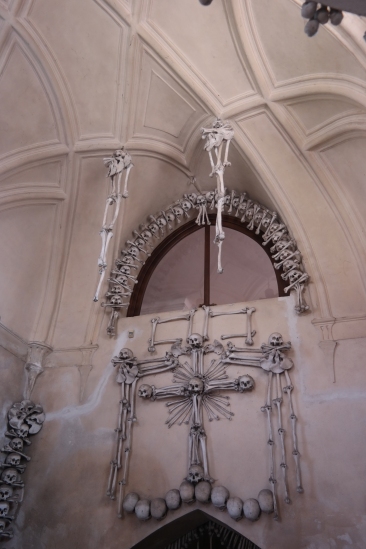 Bone cross in the entrance

We found lunch at a supermarket and went back to Prague to see some more of the Jewish Museum. First we visited the Pinkas Synagogue where thousands of names and dates of Jews from Prague were written on the walls in memorial. There was also had an exhibition of children’s drawings from the concentration camp Terezin – some of happy dreams, some of their terrible situation. It was really quite haunting, especially as there were dates by the drawings indicating that most of them had died between the ages of ten to fourteen.

Afterwards we visited the Jewish Cemetery, which was too small for the needs of the Jewish town, so graves were layered on top of one another, sometimes up to ten deep. There were many headstones, all tilted at odd angles – Prague is full of these kinds of fascinating places.

Inside the Pinkas Synagogue

We then took a tram to the castle side of the river to take the funicular railway up Petrin Hill to the rose garden at the top. Our legs were so tired that we just sat around in the afternoon sun for a while before returning to our hostel for tea.

The view of the castle over the river 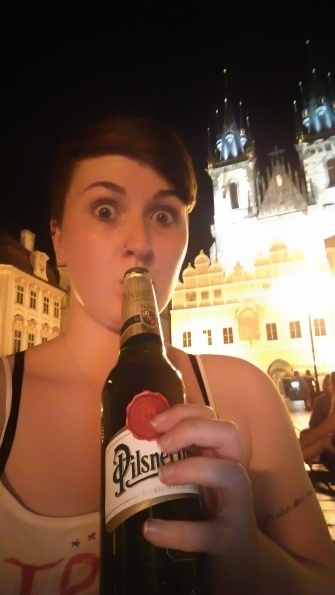 In the square at night

The previous evening we had walked through Old Town Square and it had been full of young people sitting on the floor, drinking and chatting. We decided to do the same and headed out with some beers and ciders to sit and soak up the atmosphere of the square at night. It was such a beautiful, tranquil place to sit – until a road sweeper came along and forced everyone to stand up and move over as it went by! Must keep that square clean eh?

Day 4:
We checked out, but remained in the hostel to read and use the wifi until we had to leave for our train. On the way we walked past the stunningly ornate Jerusalem synagogue – my parting shot of Prague!

Tips for Prague:
– Go for at least 4 full days – there is so much to see in Prague
– The Jewish history here is eye-opening, it is definitely worth seeing the museums and possibly doing a day trip to Terezin.
– Do a walking tour, the castle tour was especially good.
– Definitely go for a drink in the Old Town Square at night, the atmosphere is incredible – there are many bars or if you’re poor like us, grab some beers from the shop and take a seat on the floor.
– If you like meat, the traditional food is amazing – vegetarians and vegans, prepare to do some restaurant research!
– Beer is cheaper than water (not technically a tip – but good to know!)